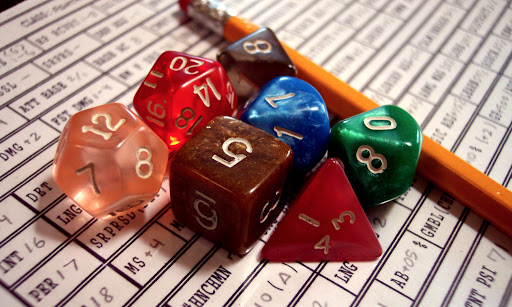 In life we play roles of all kinds. We learn sets of rules and play along with the settings and constraints presented to us. We have flaws, objectives, bonds, strengths and gain wisdom and skills over time as we experience things. When honed these can help us overcome trials of increasing difficulty, all the way until the end. And that is the story of our lives.

In a more streamlined way people like Gary Gygax or Sandy Petersen created rulesets and universes for people to experience imaginary lives in a similar fashion. Though there exist many variations that is the idea behind what we call tabletop Role Playing Games (RPG).

But what’s the use of diving in such an endeavor? While the world is in chaos is there no better use of our time than escaping in make-believe worlds and characters? Is there a way to use these tools and appropriate them in game experiences to face real life trials?

First of all, let’s define what we mean by table top role-playing games. Role-playing games are the recreational activity of acting out, more a less a role, in a make-believe world relying on collective imagination for storytelling. They usually are cooperative, have an element of randomness and there exist many variants. Most of them require pens, papers and dice.

There have been role playing games since the late 19th century with the “german game”, but the hobby took off in the 1970’s with the publication of dungeons and dragons (DnD) by Gary Gygax. Then it was just corridors with monsters and loot, and it evolved into worlds and settings tied together by sets of rules and a common lore.

Back then it had pretty bad press, between being reserved for uber-nerds and pushing youngsters into satanic cults. Nowadays, RPGs like Cthulu and DnD are references known by most and the hobby is less stigmatized. It is even sometimes promoted and investigated for its educational or therapeutic potential.

After studies showed that there was no more feeling of alienation or antisocial behavior in RPGers than the general population, academics started investigating the opportunity for socialization, moral training, literacy and even arithmetic that the medium offered.

But what is the point specifically of RPGs in an era where people try to gamify everything? What is the value of the “experience” people have in such activities?

Here are the rules… What do we do with them?

I will take DnD as an example. For the record it is not the best system or example. It is, however, the most popular and widespread. (and the one I know best)

A game usually takes place with several players (three to five) and the game is “run” by a game or dungeon master (DM). The DM is in charge of the skeleton adventure, the coherence, playing everyone and everything that is not a player and ruling over the game. The players have to play their characters as they see fit, face the challenges the GM throws at them and have fun.

Regarding TRPG There are two things we have to distinguish: the crunch is the ruleset that everybody playing agrees to follow. And the fluff is the narrative element that comes to justify and explain the verisimilitude of what’s happening.

Every game and every table interprets these concepts uniquely. Rules are bent and sometimes narration takes a dive. Every one contributes to advancing the story and uses their character and its capacity to do so however they want.

Role playing, as the name suggests, allows people to “try” characters, behaviors or opinions. It relies on speech and imagination and can be used to simulate a situation in a simpler manner than it exists in real life. By using the resource of storytelling (moral dilemmas, conflicting interest, individual goals of the protagonists) it pushes players to make choices and experience some of their impact, the characters being the motor of the stories.

The stigma that contributed in part to significantly slowing the adoption, acceptance, and growth of the role­ playing games (RPGs) by the general public.

In the past 10 years studies investigating the potential of pen and paper RPG for education and therapy have gained momentum. However usually the number of test subjects were very small along with the scope of variables tracked, and the time periods observed, so only a few causal aspects have been somewhat defined. This leaves the possibility of a high bias in data due to the limited selection size of the populations studied, and the lack of single, double or triple blind study methodologies. This leaves a significant gap still waiting to be filled.

In the forty five years since the inception of role playing games, the studies have just reached the tip of the iceberg, the potential benefits indicated so far, seem to hint at something that could be very beneficial to many populations in the next thirty years of research.

Here are a few examples of them: