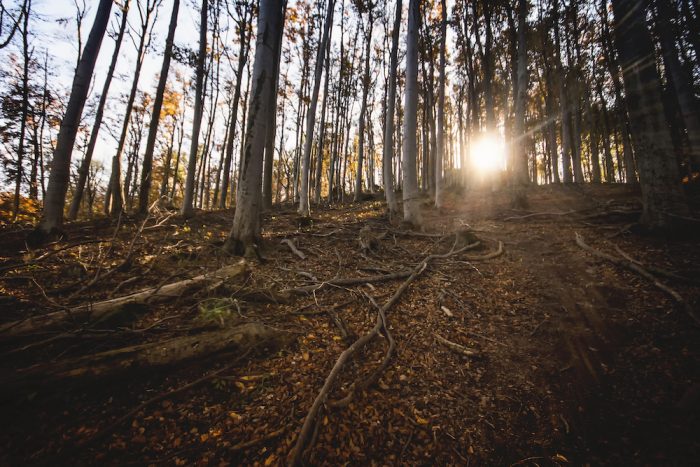 Ever since the middle of the 19th century, the atmospheric CO2 concentration has been steadily rising due to anthropogenic activities. If you want to know more about the main sources of CO2 at the global scale,  have a look at the Global Carbon Budget.

In this blog post, we will focus on forests as carbon sinks. Forests are one of the main carbon sinks at the global scale. The process of photosynthesis allows trees to capture atmospheric carbon (CO2) and transform it into carbon compounds (mainly sugars) that they can use for their growth and metabolism.

Once carbon has been fixed by the leaves, it is allocated by the tree to different compartments such as trunk, roots, branches, and reserves. Some of the carbon is allocated directly to the soil through rhizodeposition (all material lost from plant roots) or to mycorrhizae (fungi in symbiosis with plants that in exchange for carbon compounds provide the plants with essential nutrients).

Soil stores more carbon than vegetation, as indicated by the larger radius of the soil circle in Fig. 2 compared to the circle for vegetation. Soil stores carbon as organic matter and litter. Litter refers to the dead branches, leaves, and roots that fall on the ground. This litter is quickly decomposed by microbes. This decomposition process produces CO2 (mineralisation), while also producing less degradable organic matter, which can be stored for a long period of time in the soil. Most serious carbon emission mitigation initiatives now focus on soils. The “4 per 1000” initiative is an example of this trend. It aims to increase the carbon storage of soil by 4 per 1000 every year, which would be enough to reduce CO2 concentration due to anthropogenic activities in the atmosphere.

So far, we have focused on the reduction of CO2 by forests. While forests mainly act as carbon sinks, they also emit carbon through respiration. Every living organ of the tree breathes, as do the microbes in the soil. We therefore need to take carbon capture and respiration into account when evaluating a forest’s carbon storage. To obtain the net carbon stored by the ecosystem every year (equivalent to Net Ecosystem Production a.k.a NEP), one can subtract the total ecosystem respiration (Reco) from the carbon capture through photosynthesis (Gross Primary Production a.k.a GPP):

Autotrophic respiration (Rautotroph) is the sum of all the respirations of the tree organs: roots, trunk, branches, leaves.

To test this hypothesis, FACE experiments were set up. FACE stands for Free Air Carbon Enrichment. They consist of towers that are used to inject carbon dioxide and locally increase CO2 levels. This allows to test the effects of future CO2 concentrations on diverse forest processes and ultimately the NEP of a forest.

Such an experiment was conducted in a mature eucalypt forest in Australia by Jiang and co-authors: The Fate of Carbon in a mature Forest under carbon dioxide enrichment.

The artificial increase in local CO2 concentration was 150ppm (ppm is parts per million) above ambient levels (usually around 410ppm nowadays). The authors found a concurrent increase in Gross Primary Production (GPP), indicating increased carbon assimilation through photosynthesis. This confirms that higher ambient CO2 levels lead to higher photosynthetic rates. One could deduce that a higher GPP results in a higher NEP. Contrary to this however, the authors measured increases in ecosystem respiration fluxes (Reco) that counter-balanced the increase in GPP. They show that this increase in ecosystem respiration is mainly due to increases in soil respiration. This suggests that when GPP increases, the allocation of carbon to the soil increases. The reasons for these changes in allocation are not well understood yet and require further research.

All in all, the results from Jiang et al.  indicate that an increase in CO2 concentration in forests does not lead to an increase in carbon storage. This has strong implications for models that attempt to predict the response of ecosystems to increasing levels of atmospheric carbon.